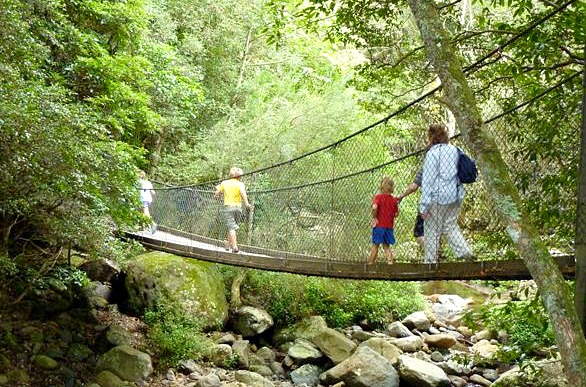 I’m writing this in case you don’t want to force your child to do things, but you feel pressure all around you. Maybe you feel pressure to force your child to go to school or to sit down and do schoolwork at home or to take away their iPad – and it doesn’t sit well with you. In your heart you know you don’t want to force. You don’t want to nag, lie or manipulate your children either, but you’re not sure what else to do. I want you to know that you’re not alone in this and that I understand. I felt that pressure greatly at times and I didn’t like it at all. I’d like to give you some inspiration and encouragement to stay true to your desire to live peacefully and respectfully with your children. I want you to know that you can find a path forward that doesn’t require force.

Long before I thought about having children I’d developed an aversion to people using force over others. It was probably all those years I spent studying and teaching Law at university that did it; I was sickened by the many ways that people assert power over others and how the use of force is entrenched so deeply in our culture and legal system. While the use of force and punishments might seem less severe now than they did in the days when flogging and other corporal punishments were common, the society we live in is still largely built around the use of force. It shows up in conventional parenting practice all the time. Physical punishment such as smacking is still common and legal and isolation punishment such as “time out” or “grounding” is widely recommended. Punishment is just one way parents try to make their children comply with what they want.

This cultural acceptance of the use of force means that we often don’t see it clearly for what it is, and we don’t notice how our educational institutions are also built on it. I didn’t see the force used against children in the education system clearly until I had children of my own.

I was gifted with two children who were spirited, sensitive and didn’t like to be told what to do. This was certainly frustrating for me at times, and it brought my aversion to punishment and the use of force into clear focus. I was faced with a very clear choice: I could either try and force my children to do what I wanted or I could find another way. This choice came up first in relation to their behaviour and then later also in relation to education.

What do you do if your child refuses to go to preschool or school?

What do you do if they refuse to go to school repeatedly, persistently and resolutely?

What do you do if they refuse to sit down at a desk and learn to read, write or do maths in the conventional way?

When I was confronted with these issues I saw clearly what my culture and upbringing (and a voice in my head) expected of me: I should first try and gently persuade my child or use rewards; then upgrade to a stern lecture if persuasion and rewards didn’t convince them. If that didn’t work, I should try and scare them into compliance by spinning a story about the terrible things that would happen if they didn’t go to school or sit down and learn to write. Next, I should try emotional manipulation and threaten to withdraw my love and attention or to embarrass or shame them in some way. If all that failed to get a result, then punishment of some kind was expected.

The problem was, I wouldn’t do it.

Sure, I tried gentle persuasion.

A few times I even started on a scary story about “what might happen if…….” I felt myself cringe inside as the words came out of my mouth.

I couldn’t bring myself to carry on through the list of techniques until I succeeded in forcing my child to do what they didn’t want to do. My heart wasn’t in it.

The way forward appeared: it was called “unschooling.”

There is a way to live with your children and support their learning without ever using force. Its called unschooling. It relies on the natural curiosity, creativity and desire to learn that all children possess. It’s child-led education. The story of how I came to find unschooling is here.

I want you to know that when I stepped off the conventional path and chose unschooling for my sons’ education I was very, very scared. It was the scariest thing that I’d ever done in my life. I was terrified of the disapproval of my own parents. I was scared that I wouldn’t convince my husband. I was full of fear about the future implications for my sons.

I was heading “off the map” of my life experience and into territory that nobody I knew personally had ventured into (This was way back in 2005). Thank goodness for the rise of the internet! I was able to research unschooling and to connect with people who were already doing it, mostly in the US, but a few in Australia. There was excitement, experience and wisdom in the online community and I was inspired. I eventually found a few local friends who were following a similar path too. All that was greatly reassuring.

I never had a clear idea of what unschooling was going to look like or where it was heading. My anchor through the whole journey was a promise that I made to my sons many, many times:

“I will never force you to do anything that you don’t want to do.”

That was a promise I felt compelled to make by something deep within me. It was a matter of my own integrity rather than any philosophy or educational fashion. That promise was the starting point for a wild, fun and challenging family adventure that was primarily directed by my sons. They took me further off the conventional map than I could have imagined and it was wonderful, liberating and often scary for me.

I want you to know, right up front, that it is possible to follow an unschooling path with your children and still meet your legal obligations for homeschool registration in Australia. There is nothing in the law relating to home education that requires you to force your child to do anything they don’t want to do. This is something I cover in The Deschooling Course, if you are interested to know more.

In many ways, the unschooling path remade me. I went through a profound period of deschooling during which I unlearned most of what I had learned about education. I learned new skills in listening, communication and problem solving to help navigate my relationships with my sons (and I wrote a book about it). There were all sorts of challenges and surprises in that arose along the way, such as the “delay” in my sons learning to read, which you can read more about here. I began a deep spiritual journey that continues today and I watched my sons grow up into amazing (to me) young men. I now live an ordinary, peaceful and post-conventional life in which I follow my inner guidance to write, share and assist others where I can.

I don’t know what unschooling or child-led learning will look like in your home, or how things will turn out for your children. I know for sure that it will bring up some of your fears. But I want to shout from the rooftops how wonderful it feels to follow your heart, your intuition and your integrity. It is a truly liberating path to take with your children.

So, if you never want to use force to teach your children, and you want some support, reassurance or a helping hand, please get in touch. You may also enjoy The Deschooling Course. You can find the details here.